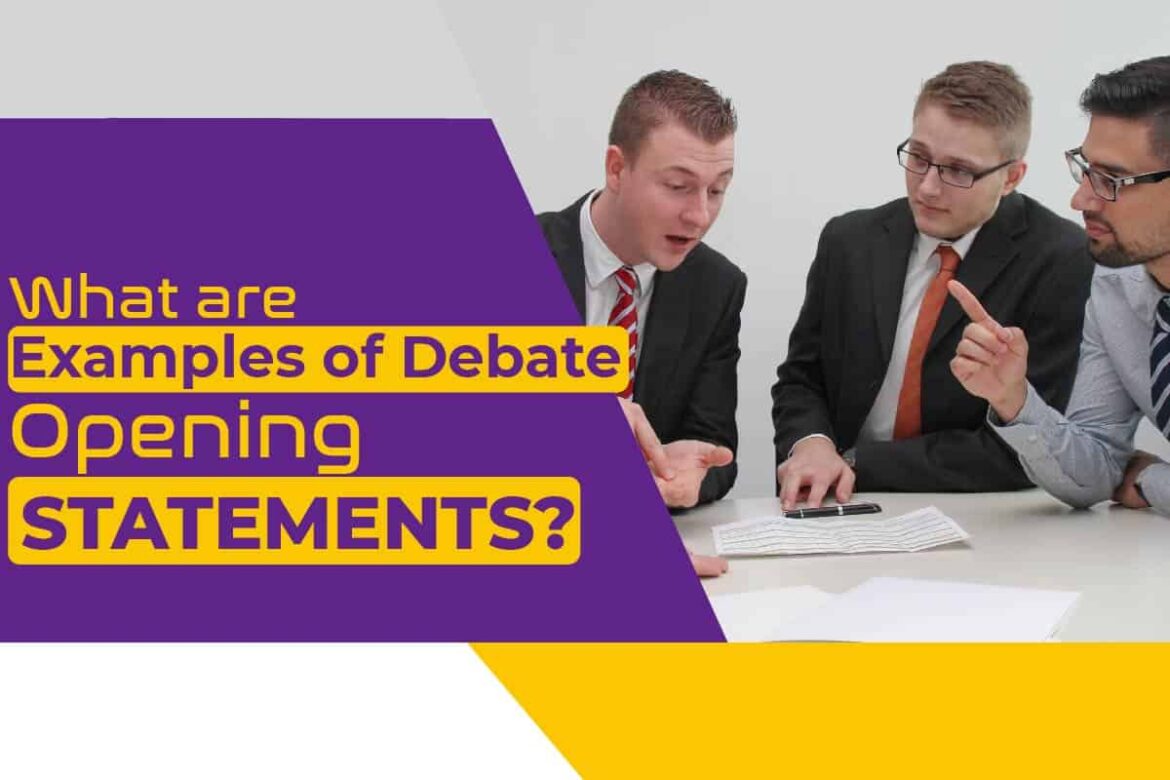 Crafting a debate is simple. A debate is a structured holding of a specific subject. Speakers have the chance to present their ideas that propose or go against the subject matter. However, coming up with a debate opening statement is a challenging task.

An opening statement is a crucial part of a debate. It offers the first impression to the audience and prepares them for the shreds of evidence to be presented eventually in the debate.

Whether a trial or a school debate, a debate needs to contain the following essential elements.

The opening statement should entail a theme that acts as a framework for any evidence presented. The theme needs to align perfectly with the topic evidence and support your debate side.

Most times, theme expression might be difficult with no backed-up arguments. Arguments are not allowed in opening statements.

The most significant way of developing an opening statement is by using a single summary sentence. Employ a non-lawyer tone when doing that.

Present the heart of the case effectively by answering the question, what really happened here?

After introducing the theme of the case, this is the time to present the scene. Work on your framework that you earlier presented.

You might illustrate the scene in a story and present people and papers as they naturally align with the case theme. Stir up the audience’s attention and make them look forward to it as the debate progresses.

The debate audience cannot generate opinions until all the pieces of evidence are laid out. As mentioned above, it is improper to bring in arguments during opening statements.

How can a debate participant introduce his or her case without arguing? You can manage through this by ensuring your opening statement properly presents what the laid-out evidence proves.

It would help if you did not express your opinions in an opening statement nor send attacks to the opponent side.

All you need to succeed without arguing is to assemble your evidence and facts appropriately.

To pass this test, ask yourself this question; are you effectively describing the presented evidence or rather drawing a conclusion from it?

The description should be part of the opening statement. The conclusion belongs to the closing argument.

Despite arguments being non-permissible in debate opening statements, you still need to be persuasive. To make your debate part fascinating, describe your evidence results to your audience.

The facts will firmly argue the case. There will be no need for arguments when you perfectly fit your facts and evidence.

Deal with all facts

Is it important to expose the “bad” factual information in your opening statement? It is quite wise to address even the harmful information before your opponent side does it for you.

By presenting both the bad and good information, you might earn more credits from the audience.

You might alternatively wait and see how the debate activities will flow. Most times, the audience does not expect a negative opinion about your debate evidence.

You can go along with the middle ground and spend few moments discussing the damaging information. Or, you might pass through the positive evidence first and then address the harmful facts. Try to emphasize their less importance to the debate subject.

The debate opening statement should be straightforward. Avoid beating about the bush. Nonetheless, it would be best if you leveraged exaggeration in some debate cases.

For example, you might take keen on the other’s party pleadings. There might be the use of exaggerated facts that lack suitable proof.

Your opening statement might be highly effective if you move around the debate space. It applies to the sections aligning with the set rules. You can employ movements when pitching out a new different point.

It will grab more attention from the audience and keep them intact to your debate case. For critical points, you might get closer to the audience for stronger emphasis.

However, do not overdo the movements. Do not let the audience grasp more of your movements than your debate points. Move around effectively. You will act as a threat when you invade the audience’s space.

Note down your introductory remarks

You might give remarks of a summary of your points and proclaim your theme.

Mention your actors and places

At this part, you might want to introduce your things; papers or witnesses. It helps in making the evidence real. The audience might likely engage and believe in your tale.

Define and identify your disputes

It would be helpful to define your points of contention to the audience. You may outline, in simple language, the contents, and reactions of the complaint. Portray a general aspect of the conflict without attacking the other party.

The story section is the body of your opening statement. Gather around simple words and sentences when telling the story. Most times, the audience gets facts from this part.

Also, the stories need to be persuasive to stick to the audience’s minds. They should make sense with the evidence laid out. And make the audience anticipate the debate progress.

Point out your weaknesses

Discussing your weaknesses at the beginning might make you look honest. However, try to shade some positive attitude when your opponent brings that up.

Keep the section brief. Only include weaknesses that might interfere when showcasing your supporting evidence and facts.

You can conclude your opening statement by summarizing your theme and asking the audience for a particular decision.

Finish off your opening statement with a confident stature. Be sure the audience knows your stand on the topic and their remaining role to play.

Standard Rules For A Debate

There are standard rules you need to comply with when running a debate. Regardless of being an organizer, or a participant, you need to follow them strictly.

You may get yourself disqualified in case you breach these laws. Thus, it would be best to have a clear grasp of the debate rules to avoid penalties.

Here are the rules;

Speak and treat each other fairly when in the debate. You are not allowed to use unethical language. You might save all the attacks for the arguments of the other party.

Typically, a political or legal debate awards its participants a specified time to present their views. You need to plan your ideas accordingly and pitch them out within this restricted timeline. Most opening statements take around ten to twenty minutes in front of the audience.

The ideal importance of the allocated time is to create fairness among the debate participants during their presentation. Therefore, you need to be straightforward when delivering your points and leverage your time.

Otherwise, your speech might be incomplete when the time runs out. It is a violation for a debate participant to interrupt another one during their speech. Every person has his or her time to present his or her views.

Debates do vary. Some of them might require them to hand over their papers in time. If this case applies to you, conclude your paper early for impressive reviews.

A Short Example Of An Opening Statement

Below is an outline sample of an opening statement for your debate.

The motion statement for the debate for this example is, technology harms our future.

Honorable Chair, our motion today is, technology harms our future. I take this opportunity to present my views against the motion.

As we all know, there is always a status of balance for everything. Technology, too, comes along with its benefits and harms. With its dynamic state, it has brought improvements to our education alongside health systems.

With all these vast benefits, how can technology be harmful to our future? Remember to use persuasive language and a confident tone. Also, you can back up your views with relevant quotes.

I believe the information presented above will assist you in crafting your opening statements for the coming debates.

It would be best to bear the tips above in mind. If you organize your points and evidence effectively within the allotted time, nothing will stand in your way from winning the debate.

Is Capital Gazette Liberal Or Conservative? Truth Is Finally Out

Can You Wear Gold And Silver Together?...

Can You Connect A Nintendo Switch Lite...