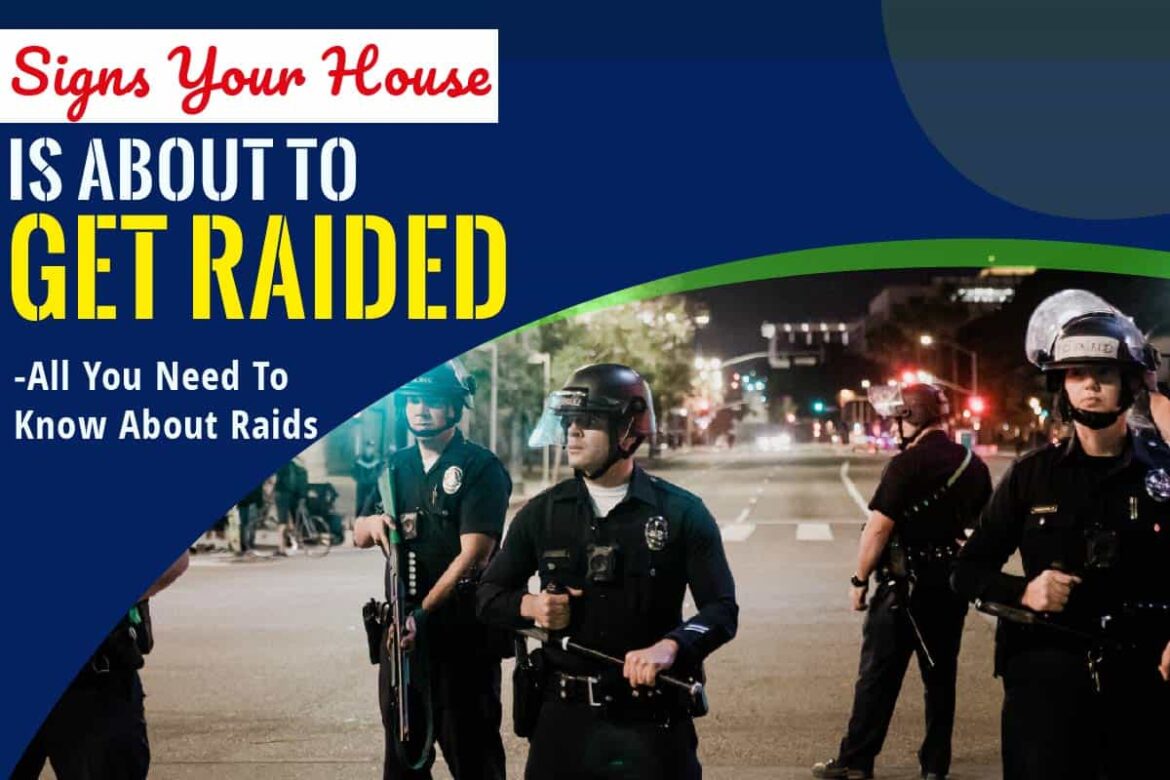 If you have ever witnessed a home raid, then you know exactly how disturbing the experience can be. The sound of boots knocking your door down in the middle of the night is scary and can cause psychological problems to the victims.

This is why any information that might prepare you for a raid is invaluable.

But the question is, how exactly can you tell if your house is about to be raided?

There is no way of knowing for sure that your house is about to get raided. However, if you keenly observe law enforcement activities happening around your house, you might be able to detect a raid in its planning stages.

The process of performing a raid on a house follows the following stages; information gathering on the target, analyzing the target before executing the raid.

Law enforcement officers are required by law to follow a certain legal process before raiding any property.

The first step involves the filing of a warrant to get permission to spy on your premises. This can only happen if they have a legitimate reason to believe that some illegal activity is being done in your house.

A magistrate will then review their application and, upon approval, will issue the warrant. The officers will then start to collect all the information they can get on your house. This can be done using various techniques.

Some of the common ways include taking pictures of the house and video surveillance. Tapping communication lines is also a common practice, especially with high-value cases.

The next step involves analyzing the collected information. This is a crucial step as it allows them to come up with the optimum raiding strategy.

A Warrant For Your House Raid

If you are not arrested, the police cannot perform a raid on your house without your consent. They, therefore, have to approach a magistrate for a warrant before showing up at your house.

If the police have to arrest you for some reason, they can also raid your house without a warrant, especially if you are a flight risk.

However, there are instances when the police can raid your house without a warrant. For instance, if the police have information on an illegal activity progressing in your house, they will rush in to stop it. They won’t need a warranty for that.

In some cases, police officers may bring in suspects for questioning then ask them for permission to search their houses. Upon giving them the consent, they let the suspect loose only to raid their house when least expected.

Answering Questions During A Raid

A lot of people don’t know what their rights are during a police raid. Knowing what to expect during a raid will give you the composure you need to endure such an experience.

Many law enforcement officers will try to lure you into answering their questions using threats. However, the authorities’ decision to answer any questions posed to you during a raid is entirely yours.

If you are uncomfortable and unsure of what to say to them, you should refrain from speaking to them and ask for legal representation. Most people presume that they have to answer these questions, and in the process, they end up incriminating themselves.

However, if you are in an apposition to represent yourself, you can engage them, but only to a level, you are comfortable with depends on what they ask.

Some questions like directions around the house could help hasten the raid and reduce damage on your property. For example, showing the police where the key to your garage is will prevent them from forcefully breaking into it.

Documents The Police Need To Have During A Raid

In many cases, police officers and robbers use the same raiding techniques. Robbers often impersonate law enforcement officers to gain entry into people’s houses and rob them. This has necessitated the need for proper documentation as a form of identification.

They would normally do so by telling you who they are and the purpose of the raid. It is your right to check the details of their documents, including the warranty.

You should confirm that the home address listed on the warrant is that of your house. There have been cases of police officers raiding wrong houses and rounding up wrong people. Also, check the person to whom the warrant has been issued and the reason for the search.

After the raid is over, the people in charge of the raid should endorse the warrant and indicate whether the search’s objective was achieved. They should also indicate any objects seized or arrests made.

You have a right to request a list of all the items seized from your property. You can then use the list to make a follow-up on all your missing objects after the raid.

The document should also highlight the operational details of the raid. Such details include when the raid was conducted and the names of officers who conducted the raid save for raids linked to terrorism.

A copy of the endorsed warrant should be handed to you or left on the premises. The police are also expected to temporarily secure a house if their intrusion acts might have made it vulnerable to vandalism.

Should One Be Searched During A Raid?

Standard search warrants do not allow police officers to search people but rather their property unless they are arrested.

The police might also feel the need to search you if they have a reason to believe that you could be having a weapon on you.

However, they are supposed to search a decent way that will not infringe on your privacy.

Can Authorities Confiscate Money During A Raid?

Yes. In some instances, the police can seize money found in your house if it is evidence of illegal activity. They can also seize money they believe in having been earned through illegal dealings.

It is your right to witness cash seize on your property. The police should also ask you to sign the evidence bag used to collect the cash. Proper documentation is important as it will eliminate the risk of losing your money.

Seized cash cannot be held for more than 48hrs without the authority of a magistrate. If the money has ties to illegal dealings or is subject to further investigations, the magistrate can allow the police to hold on to the money for up to three months.

Property Damages During A Raid

Police raids can be wasteful and destructive, especially when they have to use force to access the house. Such raids would normally leave your house with broken doors, shuttered closets, and tattered carpets.

Such damages can cause a fortune in terms of repair. If the raid was legal and lawfully conducted using reasonable and necessary force to gain entry, the chances are that the government will not compensate you.

However, if the officers did not follow the required protocol, you can sue them for any damages on your property. It is for this reason that some people choose to record raids on their phones. Such recordings can be used as proof of misconduct in court.

What Happens If Your House Is Wrongly Raided?

Authorities might have a wrong “last known location” of a suspect and raid the wrong house. If such a situation occurs, they are legally required to swiftly act to prevent any further damages that may result from their intrusion.

If your home is wrongly breaches and assets destroyed, you are liable for compensation. You should seek the counsel of a civil lawyer on how best to handle the situation.

Can The Police Raid A Shared House?

Yes, unfortunately, they can. However, their operations will only be limited to areas related to their search. To gain access to such a house, the police would need a warrant or consent from an adult occupant of the house.

If the suspect is already arrested, the police might raid the house without a warrant. However, their search should only be restricted to the suspect’s rooms and shared spaces.

There isn’t a standard test to determine when your house is going to be raided. You can, however, improve your chances of detecting a raid by being observant. Being aware of activities happening around your house is what will give you leads on any planned raid.

For instance, if you observe a police officer scouting your neighborhood taking pictures of your house, you should be alarmed. Also, be on the lookout for any surveillance equipment directed to your house.

You can do so by checking your house for any spying equipment like wiretaps. With all factors in mind, the best way of protecting your house from police raids is by being a law-abiding citizen.

Why Can’t I Remember My Childhood? Feasible Reasons

How Much Does It Cost To Take The Health Dare? Health Dare Programme Explained

Can You Get A Job Without An...