Is Capital Gazette Liberal Or Conservative? Truth Is Finally Out 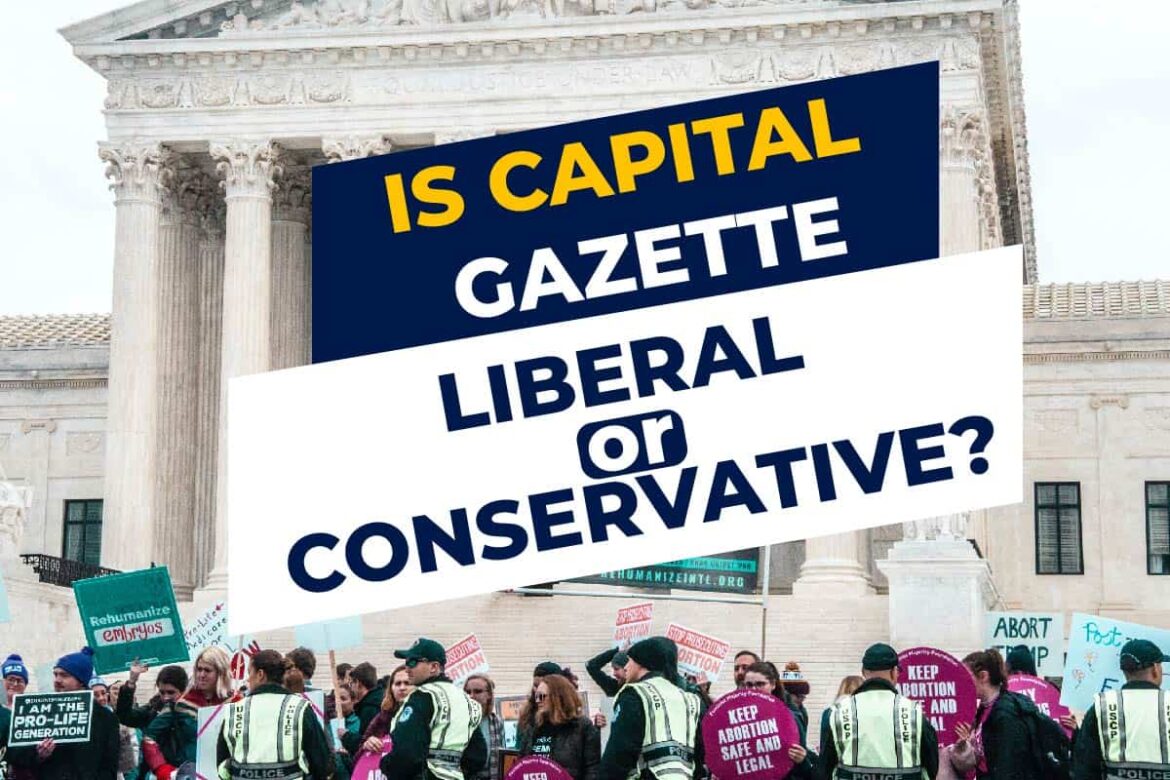 Capital Gazette is a daily news source that includes Crofton-West County, the Capital, and Maryland Gazette. It was founded in 1884.

The gazette covers food & entertainment, politics, sports, news, and opinions in Annapolis, Maryland. It mainly focuses on the news in Maryland and its environs.

The Baltimore Sun Media Group and Tronc own and manage the Capital gazette. The paper gets its funding from advertising and subscriptions.

One of the questions that spark fierce debate is whether the capital gazette is liberal or conservative.

The capital gazette is grouped as a left-center biased media source. What this means is, it has a slight to moderate liberal bias. They are believed to publish factual information, although with some hidden agenda.

They use loaded words aimed at influencing their readers to favor liberal causes. This is achieved by appealing to their readers’ emotions and stereotypes.

Before we get deeper into this, let’s first define what political bias is. Political bias is a perceived bias involving altering information to make a political party or candidate more appealing than the other.

Like any other media source, the Capital seeks to be seen as an unbiased news source with no hidden conflict of interest in their news coverage.

Capital gazette trains their readers to think of political bias allegations in a partisan way. They project themselves as objective by citing both the liberal and conservative sides.

Since both sides can’t be right, one will have to be wrong. In the event that there are tons of complaints from both sides, it will be suggestive that the capital gazette is in the “middle.”

It comes as no surprise that the capital gazette restricts its employees from publicly discussing their partisan political stand.

As an employer of the paper, you can be fired if found going against the said policy. Discussing their political stand out on open may undermine their readers’ trust in their political coverage.

Many media sources have two incentives from a profit-making point of view: reducing cost and increasing revenue, and Capital gazette is no exception.

You will notice that media outlets in a competitive market attract readers by reporting and taking a controversial stand.

People love to read about contradictory headlines and stories, and major media sources are taking advantage of this.

The downside of this move is you will end up appealing to some readers and estranging others. Capital Gazette is warry about taking strong controversial stands. This is because they are likely to lose some of their readers, not to mention advertising revenue.

Any “story” that can negatively impact their audience or advertising revenue is avoided as much as possible.

Here is a further explanation of my point.  The paper is just not willing to take a stand that would affect their readers and revenue. Of course, unless compelled to cover the story by a competitive counterpart covering the same story.

In such a case, they will be forced to cover the story to maintain their credibility among readers.

Journalism is an expensive endeavor. The more money is spent on news coverage, the lesser the profit margin gets. And many profit-based media sources are keen on this; they want to make huge profits using as little money as possible.

As a result, many media sources have opted to rewrite and paraphrase press-releases which they pass on as news. This method has proven to be cost-effective.

They end up changing the title, paraphrasing some sentences and reordering some paragraphs to give their stories a new look.

Interestingly, they always try to hide it to their readers that they are being cheap.

The paper sometimes curry favors with their news sources to reduce the cost of gathering news. They do this so that they can remain relevant and to the game.

For instance, if you are a reporter assigned by the capital gazette to cover AACPS, you will be expected to write several articles a week.

If you are not on the same page with your sources at the assigned place, you will have difficulties collecting information. They will shut you down and probably give their ‘stories’ to your competitors.

For stories and Ideas, you need to have a good relationship with your sources, to some extent, even if it means compromising on few things. Securing other sources of information is quite expensive. And media outlets tend to avoid this.

In a nutshell, if you want to minimize the cost, you will report the news from your source’s perspective. This may not be in the best interest of the public domain.

The Shooting At The Capital Gazette

On June 28th, 2018, a tragic event happened at the Capital Gazette newsroom in Maryland. Five employees were gunned down by a gunman who was later identified as Jarrod Ramos.

Two more were injured as they tried to escape the gunman. Shortly after the massacre, Jarod was arrested by the authorities. Here are the five victims of the capital gazette shooting.

Rob was a veteran journalist and a father of three. He was a brother to author Carl Hiaasen. Rob joined the Baltimore Sun Group in 1993.

He worked as an assistant editor for the capital gazette since 2010. He lived in a happy marriage for 33 years. The day of the shooting was his wife’s birthday.

Gerald, who was 61 at the time of the shooting, was an editorial page editor. Those who were close to him said that he was a bit of a loner but very intelligent. He was a very respectable writer who fully understood the political dynamic of the community.

John McNamara worked at the capital gazette as a staff writer. He was 56 when the shooting occurred. He mainly covered basketball in the region, and he was said to be a true sportsman.

Rebecca was the youngest victim of the shooting. She has just been hired to work as a sales assistant for the paper. He was 34 and said to be a kind, thoughtful and considerate person.

What Was The Motive For Capital Gazette Shooting?

There are many speculations surrounding the shooting at the capital gazette in Maryland. Some even believe that it was politically instigated due to their political biases.

Later on, after the investigation took its course, it was determined that all the allegations of political involvement were misguided.

The attacker was found to have his own personal reasons for attacking. Ramos had sour revenge against the paper. The shooting was connected to a defamation lawsuit he had filed against the media source.

The paper had published an article about his high school classmate whom he had harassed and pleaded guilty to the accusations. He lost the case, and that was the beginning of the ending of his freedom and the lives of five innocent people.

No, articles labeled premium can only be accessed by those with unlimited digital access subscriptions.

You will get unrestricted access, video and photo gallery, the capital and Maryland Gazette eNewspaper, blog and columnists, and exclusive watchdog journalism.

Do I need to be registered or have an Unlimited Digital Access Subscription to access puzzles and games?

No, you don’t have to be a subscriber or a registered user to have access to games and puzzles.

What is EZ Pay?

This is a payment option that you can safely use to pay for your Baltimore Sun subscription. You can pay with your debit, checking account, or credit card.

How do I cancel my capital gazette subscription?

Capital gazette doesn’t really care whether it supports liberal or conservative agendas. What matters to the paper is that the group doesn’t constitute an audience they don’t want to estrange.

They are more concerned with their revenue and audience. Also keen to avoid libel suits, most of their investigative news is recycled information from the investigation carried out by the government.

They use information and data from local police, auditors, and judicial decisions. Relying on such information eliminates any risk of lawsuits against the paper, but it comes at a price.

There is a danger of systemic bias; we all know better than to blindly trust reports of a government investigating and reporting itself.

What Are Some Cool Hacks For School Computer? Discover Fun Computer Tricks

How How To Take Advantage Of The Bonus...

What Happens If I Lose My Personal Injury...

Can You Use Olive Oil Instead Of...

Why Do Ballerinas Cut Their Feet With...