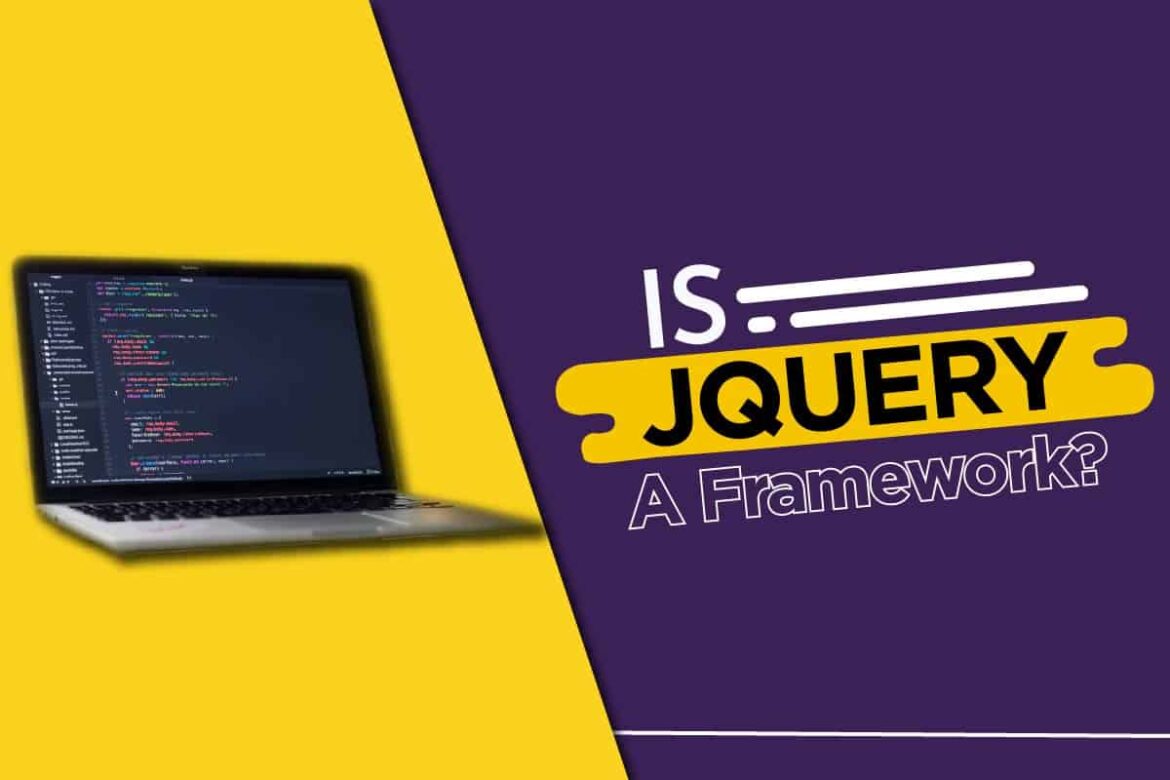 With the dynamic changes in technology, first, I thought it is a new programming language. I was surprised when I proceeded to the comments section. Some programmers in the online learning communities refer to it as a JavaScript framework, while others its library.

The terms raised an actual debate. First, let us answer the question, then clear the air and familiarize ourselves with this distinct technical jargon.

jQuery is a JavaScript library and not a framework. Its online official documentation labels it as a library. It assists you in writing your code faster without affecting the overall programming style.

However, jQuery might also fit to be a framework. Though, it does not follow the framework criteria quite strictly. The answer to the question strictly depends on how you apply your jQuery.

What Is A Framework?

As Wikipedia defines it, a computer programming framework is an abstraction where you, as a developer, can selectively specialize the common code whose functionality is generic. The term abstraction might sound too technical.

Let me put it this way. Abstraction is the process of getting rid of temporal content. You can call a framework a platform for building specific applications. It comprises predefined functions and classes that you might use to get input from users or the system’s overall interaction.

It smoothens the system development process. Therefore, developers do not need to start from scratch when building a new application. A framework does the routine tasks for you.

In technical relation to an API(Application Programming Interface), a framework houses an API. An API is a set of protocols that allows internet components to communicate with each other.

It is different from a framework. Its primary purpose is to provide access to the elements backed up by the framework.

Why Do We Need A Software Framework?

Software development is a daunting task. It calls for plenty of activities; coding, designing, and even testing. Programmers had to handle syntax, exceptions, and many others.

Software frameworks came to their rescue. They can now utilize a single platform that houses all these activities.

Some of the pros of software frameworks are:

A software library is a set of programming codes and data used to build applications and software programs. It assists the developer and the language compiler in the development and execution of the software.

It is made up of pre-written code, routines, files, scripts, and classes. Usually, a programmer can include a library to add functionality to a program. Or automate the software without the need to write lines of code.

You can also define a software library as a bundle of implementation of behaviors or methods, with an outlined interface where the method is invoked.

For example, when writing a higher-level programming language, you might use a library to initiate the system calls rather than executing them every and now.

Software libraries have an organized structure that enables them to be used in multiple different programs. The code part of the program is specifically used for that particular program.

In case you are handling huge data for a larger application, you might re-use the internal libraries for the independent sections.

The most vital feature of a library is to attain an effective organization for the re-usage purposes by independent programs. Generally, libraries effectively enable code sharing and distribution.

What are some of the advantages of using libraries in your code?

One of its cons may include the rising need to study the library and understand its implementation.

As we have mentioned above, a framework is a collection of libraries to build a software application. A significant example of a framework is Laravel or the .NET framework.

A framework is typically on top of a computer programming language. For instance, Laravel is a web application framework developed in the PHP language.

Now that we are quite familiar with these terms’ definitions let us check on their similarities and differences. Frameworks and libraries have distinct differences. However,  most individuals mistakenly equate these terms.

You can use a code library to handle a specific software task or add a feature to your application. On the other hand, a framework presents to you a collection that is generic or reusable.

Several features differ a framework from a library.

The key difference between a framework and a library is the type of control one has during the development process. A developer might call a library whenever they want to.

Conversely, a developer is controlled by a framework. He or she needs to absorb the workflow fully, hence the feature, inversion of control.

It explains the reasons for the popularity of software frameworks. They perform a lot of tasks for the developers.

Frameworks today decide the location for your files besides how to write the different lines of code.

In programming, the open-closed principle allows you to alter or extend a code behavior without affecting its source code.

For example, you can add the necessary functionality to a child class without editing the parent class.

Extensibility allows you to include features to a framework or work on the existing features without editing the source code.

Most popular frameworks provide you with a generic functionality for a generic application and offer you room for features addition. Contrarily, libraries do not need extensibility. Their ultimate purpose is to achieve a specific software task.

Software frameworks will provide you with a bunch of lines of code. Most times, you do not alter the code. You might extend it without altering the source code.

Is Jquery A Framework?

It has an easy syntax that makes it easy for you to create animations, navigate through a document and manage events. The DOM is a representation in the form of a tree structure for all the elements on a web page.

Ajax is a suite of technologies that add an implementation on a web app when communicating with a server. It incorporates HTML, CSS, JavaScript, JSON, and DOM.

You might select an element with a specific property with less complexity. For instance, making an element such as a heading to respond to an event, such as a mouse click.

Normally, developers can include their plugins in the library. A plugin is a component in software that enables you to include a feature in a specific program.

The fundamentals of working with jQuery are,

With the open-source library, Ajax can communicate with the server faster and update the content without reloading the web page.

The library offers you simple syntax on adding event handlers to the object model by using JavaScript.

It saves you from the longer route of HTML event attributes when calling JavaScript functions. Website developers are highly encouraged to separate the codes for these different languages.

You can add new events and methods. Then, re-use them in the form of a plugin.

jQuery comes along with a consistent interface that supports all these multiple browsers.

Cons of using jQuery may include the following:

Some of its functions are not yet developed. It may force you to build the missing required features for your application.

The client might need to handle many jQuery functions. Excessive use of them might slow down your client. It would be best for developers to utilize an additional cache for faster response.

jQuery is a JavaScript library populated on many websites nowadays. Most web communities confuse it with a programming language or a framework due to its superb capabilities.

As we have seen above, frameworks do not allow you to modify the source codes. For the case of jQuery, you can alter your code to meet your application needs. For example, you can add events or behavior to a DOM element.

Frameworks have the inverse of control, unlike libraries. jQuery lies mostly on the library’s side. It is a software tool used to make your system implementation easier.

How Do Magicians Eat Glass Without Being Injured? All About Magic

Are Bonsai Trees Hard To Grow? The...

Is Distilled Water The Same As Bottled...

Why Is My Cat Obsessed With Me...