How Do Magicians Eat Glass Without Being Injured? All About Magic 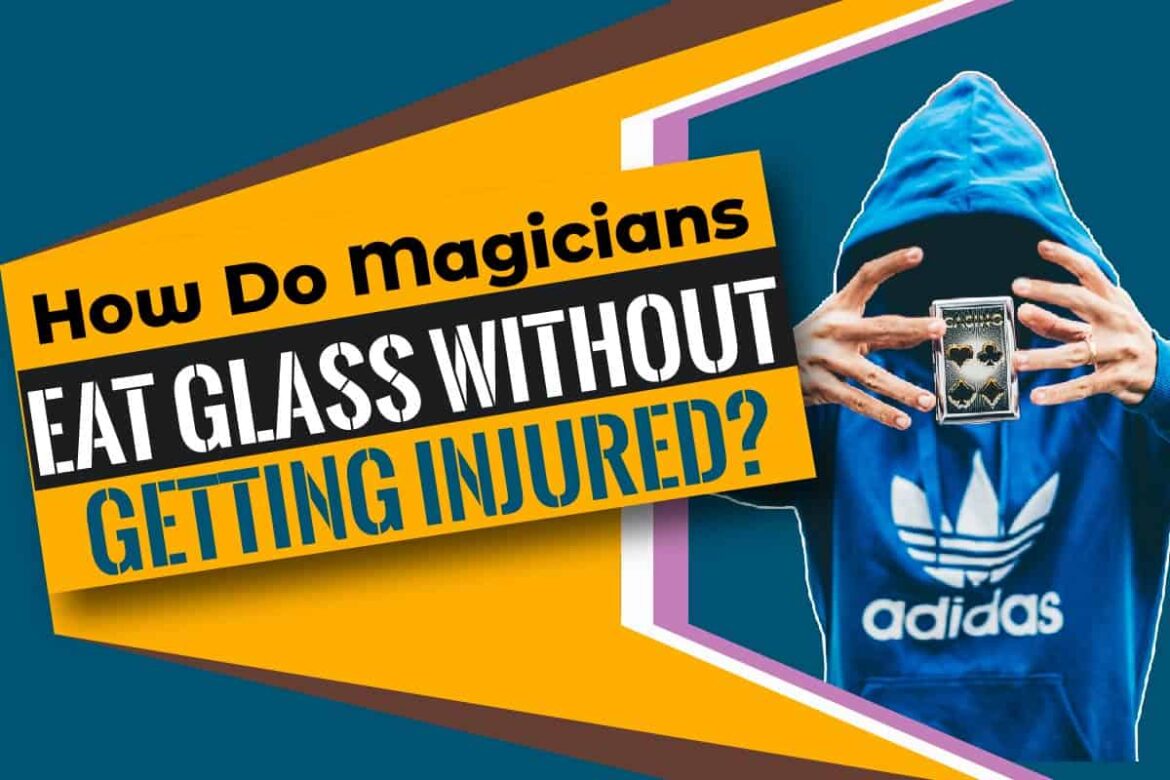 Everybody loves Magic. It is an art that has many people amazed. There are millions of magicians on the planet, and they all do a lot of different tricks for their audiences.

Some have walked on water; others have walked on ropes or pulled bunnies out of hats. These are all simple and kind of cute. There are some bizarre and scary tricks.

One of these tricks is eating glass. Many fans are curious about how magicians can eat glass without getting injured. Many magicians have been seen breaking glass, chewing it, and swallowing the pieces.

Here is why magicians eat glass without getting injured

They don’t eat glass. Magic is mostly an art of deception. The magicians do not eat glass. They eat ice. Ice has a resemblance to broken glass.

The magicians break the glass and put a piece of ice in the glass. When it is time to chew the glass, he picks the ice and chews it. This makes it look like he is eating glass.

Details On How To Do The Eating Glass Trick?

This is a rather simple trick that you could use to impress your friends.

It is simple, but it should be done with a lot of caution. Remember that it involves broken glass, so you might end up in a hospital if you are not careful.

First, you need to prepare the ice to chew. You need to get a flat plastic container. In the container, put about a quarter of an inch of water. This will be around the same thickness as the glass you will use for the trick.

You should then get the container with water and put it in a freezer. Let it stay there overnight so that it freezes completely solid. After it is frozen, you will have a thin sheet of glass.

Break the sheet using a hammer. Or you could hit it on the table to break it. The idea is to get sharp pieces of ice that would look like broken glass.

Take the pieces that look like glass and put them in another container. Put these pieces back in the freezer to ensure that the pieces retain their initial sharp shape.

You will need a towel, the glass to break, and a hammer to break the glass. Hold the ice against the edge of the towel. Make sure it faces you so that the audience does not see it.

Take the glass and put it on the towel, then wrap the towel around it. While covering the glass, place the piece of ice next to it in one motion so that it isn’t noticed.

Smash the glass with the hammer and unwrap the towel. Look for the ice piece and show it to the audience; it will look like the glass on the towel.

Wipe the ice with your hand to ensure that there are no small pieces of glass stuck to it. Glass will hurt you if ingested. The cleaning is crucial for your safety.

Put the ice in your mouth and chew it loudly. This would make it look and sound like you are chewing chard of glass.

When Did Magic Start As A Form Of Entertainment?

Magic as a form of entertainment is different from paranormal Magic that involves supernatural powers. Modern-day Magic has become one of the biggest theatrical art forms.

The first book on Magic, “The Discoverie of Witchcraft,” was written in 1584. Another was Natural and unnatural Magic, written in 1489 by Gantziony. Many other books were written during the 17th century.

During this time, Magic was a form of entertainment in fairs.

Robert Houdini was a founder of modern-day Magic. He had a Magic theater in Paris. At the end of the 19th century, there were many big magic theaters for magicians to perform.

Some magic tricks can be dated back to 3BC. There was a misconception that magicians were involved with devil worship and the occult.

What Is The Most Dangerous Magic Trick?

Eating glass or razors seems like dangerous tricks. But some tricks are so dangerous; several magicians have died attempting to do them.

This is a trick that involves the performer stopping the bullet with his teeth. The bullet I fired directly at the Magician, and he or she is to spot it with the teeth without dying.

This trick has claimed the lives of at least 15 performers that attempted it. There are magicians that have succeeded in doing this trick. The death toll, however, says it all; even legendary magicians walked away from it.

The most famous death was that of famous magician Chung Ling Soo. He got shot on stage in 1918 while attempting the bullet catch.

There were rumors that it was murder out of jealousy, but nothing could be proved.

Houdini wanted to try the trick, but he was talked out of it. Houdini walking away from a magic trick is supposed to indicate how dangerous the Magic trick is.

Who Are The Best Magicians In The World?

There is a long list of amazing magicians to pick from. There were great magicians, and in this section, we get to know who the greatest Magician was in recorded history is.

When it comes to looking for the best, we consider fame, the level of skill their tricks need, and the connection to their audiences.

Harry Houdini was an escape artist. He was the best escape artist in magician history. He was known to escape out of any rig under pressure.

He challenged the local police to put him in a life-threatening device. Houdini then escaped from the device and hid in the crowd for a few minutes to create tension.

He then revealed himself and amazed the crowd. He was initially a card performer. Realizing that he wasn’t sensational, he left it and became an escape artist, and that is where he made his mark.

They are most commonly known as Penn and Teller. They are a pair that does all their tricks together. Penn is loud and talks all the time while Teller is silent.

This combination makes their act perfect on the stage, and they have made a mark in the magic world. They are popular mostly because of the combination of Magic and comedy.

They often release a few secrets about the trick to the audience. This makes the audience believe that they know what is happening. After the trick, they find out that it is an entirely different trick.

David Copperfield is another great magician of our time. He is the most famous Magician who has featured in many television shows and tours.

According to Forbes, Copperfield is the most commercially successful magician of all time. He started his career as a magician in 1972, and he has been a sensation up to date.

He has won 11 Guinness world records. Not to forget a knighthood by the French government, and he has been named a living legend. He has made up to 4 billion as of 2006.

Some of his best-known tricks include the disappearing and reappearing of the statue of liberty, vanishing of a Learjet, flying on stage, and walking through the Great Wall of China.

Do Magicians Have Supernatural Powers?

Magicians do not have powers; it is all skills and mind games. Magicians practice the tricks they perform. They get a trick and read up on it.

They then practice the same trick for up to a year until they have mastered it perfectly. There is no school for magicians, so most are either self-taught or learn from another magician.

Magicians spend a lot of money on books. The books contain documentation about tricks and escapes made by other great magicians. This gives them directions, and they practice to master the tricks.

There are no special powers involved. The Magician connects with the audience and does the trick using science, psychology, or other avenues they need.

Magic is fun, and it has been entertaining for audiences since it started. Today, there are a lot of magic tricks that anyone can do. You could learn some sip le tricks to impress your friends with.

Before you attempt a trick, make sure you have all the facts right. This will ensure that you are in no danger while you do the trick.

Tricks like eating glass are easy, but they could be fatal if done incorrectly. They should only be attempted by adults or under the supervision of an adult.

Is Wayfair Furniture Good? Is It Worth It?

Why Is My Spectrum Internet So Slow

How To Fix Windshield Wipers That Won’t...

How To Turn On Your Thinkpad