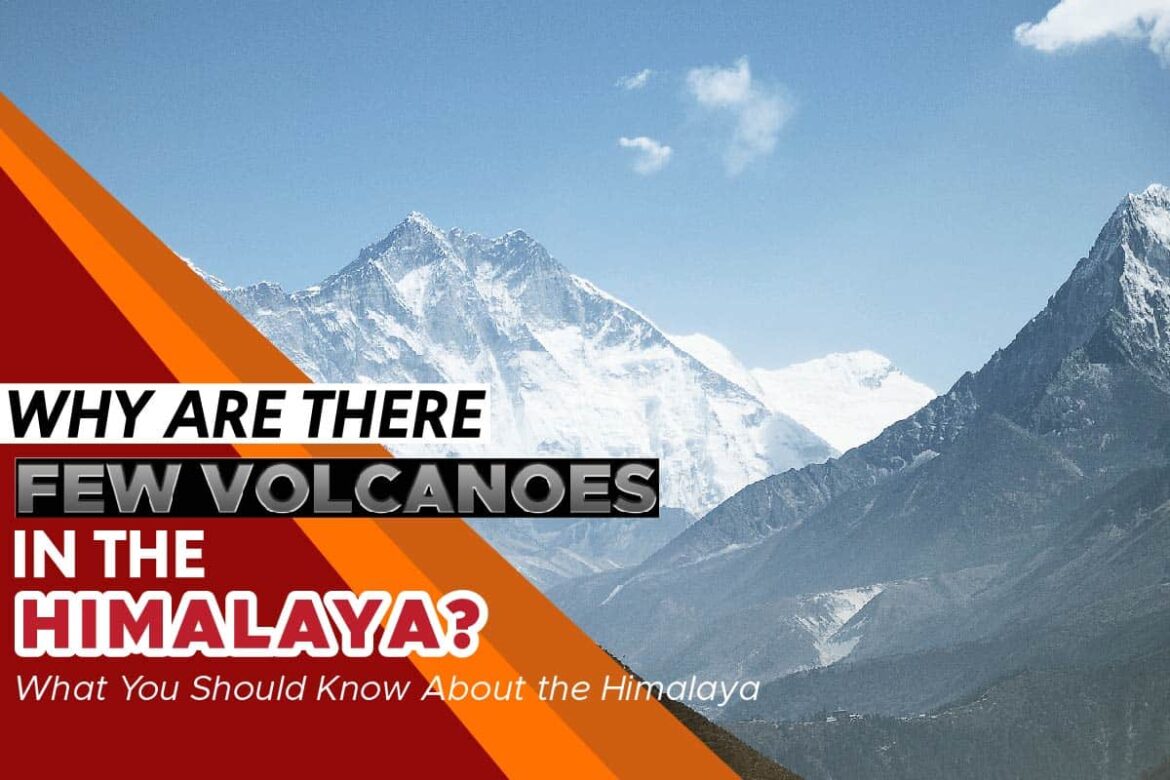 The Himalayas was formed as a result of a collision between the Indian Plate and the Eurasian plate through a process that began some 50 million years ago and continues till the present moment. Today the Himalayas has become one of the most visited places in the world. The Himalaya, though is not active as regards volcanic activities, there is still some shifting of the continental plates which trigger occasional earthquakes.

So, why are There Few Volcanoes in the Himalaya Today?

Volcanic eruptions occur in the Himalayas because the subduction that normally feeds the crust of the inner ground layer into the mantle to create volcanic magma, is very minimal there. The pressure and instability between the plates underneath the Himalayas only cause occasional earthquakes.

The History Of The Formation Of The Himalaya

Some 225 million years back, India was a very large island situated off the Australian coast, and only separated from Asia by the

Tethys Ocean. It was until 200 million years back that India started drifting northwards toward Asia at a rate of between 9 and 16 cm per year. The scraped–off sediments that were created as India began its shift towards Asia are what is known as Himalaya or Himalayan mountains today.

Between 50 to 40 million years ago, the rate at which the Indian continental plate was drifting northward slowed from 9-16 cm a year to 4-6cm per year.  The slowdown of the drifting was later explained to be the reason for the collision between Eurasian plates and the Indian continental plates. The collision of the plates also resulted in the disappearance of the Tethys Ocean which also triggered the uplift or appearance of the Himalayan Mountains.

During the early formation of the Himalayas, the Eurasian plate was partly crumpled on top of the Indian plates but due to their buoyancy, neither of the plates could be subducted. The result of this partial subduction led to the thickening of the continental crust as a result of the folding and faulting aggravated by compressional forces that were pushing up the Himalaya and Tibetan plateau.

The continental crust that occurred was thicker than 75 km. It was also the thickening of the crust of the plates that caused the end of volcanic activity within the area because the magma moving in an upward direction solidified before they reach the surface.

It is believed that the Himalayas are still rising by an average of 1cm a year as India continues to drift northwards into Asia. This continuous drifting explains the shallow earthquakes occurring in the region. Unfortunately, the forces of erosion are actively lowering the Himalayas despite the small rising it gains year after year. The Tibetan Plateau and Himalaya are trending east-west, extending up to 2,900 kilometres and reaching an elevation of 8,848 meters.

There have been serious conflicts among several nations sharing borders along the Himalayas Mountains. For several millennia, traders, pilgrims, and travellers have passed through the Himalayas, but the international border disputes seem to be limiting the trades and movement of people across the countries that share these borders.

It is unfortunate to see troops of countries sharing borders on the Himalayas deploying troops to their sides of the borders to deter the movement of goods and services. Countries like India, China, and Pakistan do have a strong military presence along the Himalayas stretch to solidify control over resource extraction.

The Himalayas has an estimated 2,400 km stretch beginning from the India-Pakistani disputed border in the Kashmir region and cuts through the South Eastern region where the China-India border is, then the disputed India-Nepal Border, and then the resolved China-Nepal border before it finally ends in the Eastern section of the disputed China-India border.

Since the emergence of the Pakistani, Indian and Chinese governments in the earlier parts of the 1900s, there have been serious conflicts over the control of the Himalayas. India and Pakistan for instance have fought three different wars over the control of the Kashmir region, and the region remains restive till today. The Arunachal Pradesh region for instance was administered by the Indian government until China claimed the region to be Southern part of Tibet- this is still generating conflicts till today.

Tensions between India and China were strained in the 1950s when the Republic of China annexed the Tibetan Plateau and stationed its troops on the high altitude grey region. In 1962, the relationship between the two countries was strained when the border war led to the development of more nuclear arms by the countries. The nuclearization of the countries sharing borders at the Himalayas has been one of the effects of the richness of the Himalayas.

The dispute between India and China over Himalaya control has placed smaller countries like Nepal, and Pakistan in more difficult positions. In 1975 for instance, India decided to incorporate the region of Sikkim into its territory- a decision that undermined the existence of Bhutan. Though Nepal used to have close ties to India now the small country is turning to China. Pakistan has also been closely aligned with China since the 1950s. In 2017, China tried to wrestle Bhutan territories from India but failed. The joining of forces to China from Nepal and Pakistan has contributed even more to tensions between China and India in the past few years in the Himalayas.

The tension between different states of the Himalayas has led to the militarization of the Himalayas. In 2020, some Chinese soldiers were caught after entering the Indian-controlled region of Sikkim and Ladakh.  The tension between different states in the Himalayas has not only generated lots of strives but there have also been some positive vibes as each state is funding numerous infrastructural projects on their sides of the border intending to solidify their territorial control.

Though there are hundreds of thousands of troops from many countries stationed at the borders, this has not stopped tourists from visiting the Himalayas, and just that they are always warned strictly to stay away from the militarized zones. This militarization of the Himalayas is clearly understood, the countries involved class occasionally and compromise in the long run. Experts see the conflicts on these mountains as mutual enmity, none of the governments of these countries is sufficient enough to understand the boundary demarcations for each country.

Until the countries that share borders on the Himalayas understand the cultural diversity of the region, there may be no peace in sight even for many decades to come. Though international organizations like the UN have tried to resolve conflicts between warring factions, it seems India and China, the leading players in the battle will not shift grounds for a long time to come.

The Economy Of The Himalayas

The Himalayas is very rich in mineral deposits and that is one of the main reasons the region has remained disputed till today. Fortunately, the mineral resources in the region are widely distributed. While animal husbandry tends to be the main source of income or employment for the locals, there are lots of rich arable land and forests. Most countries in the region also earn income through trade and tourism.

The most productive lands are found in the Western region of the Himalayas where the Kangra Valley and Vale of Kashmir are located. The Sutlej river basin is also located around this region and all these serve as sources of nourishment for the fertile land. This western region of Himalaya is where rice, corn, millet, and other crops are grown. The central Himalaya which is located in Nepal is the region where you can also find fertile land for agricultural purposes. Potatoes, sugar cane, and corn are widely grown here.

The Himalaya region close to Bhutan is where you can find fruit orchards, sugar cane, and some other crops. The increase in population in the Himalayas Mountains has led to heavy deforestation that is causing serious issues in the region.

The Kashmir region has the highest concentration of minerals which is a great opportunity for India – the country that controls most of that region. Copper and Iron ores are largely found here, the Ladakh region has lots of sulphur and Borax deposits. The Nepal and Bhutan-controlled areas of the Himalayas also have large deposits of minerals, including gypsum, Iron, copper, zinc, coal, mica, graphite, and lead.

A visit to the Himalayas is the best possible way of exploring one of the greatest wonders of nature in the world. Hundreds of thousands of visitors from around the world visit this place to learn about its rich history of formation, the people, and the international geopolitics being played by the countries that share its resources. The Himalayas is one of the most popular geographic regions of the world and will remain in history and geographical books for generations. Though natural occurrences are still ongoing and visible on the mountains, it is not expected that volcanic eruptions will occur anytime soon in the region.

Why Does My Leg Shake When I...