Which Is Safer, A Public Or Private Network? A Complete Guide On Network Safety 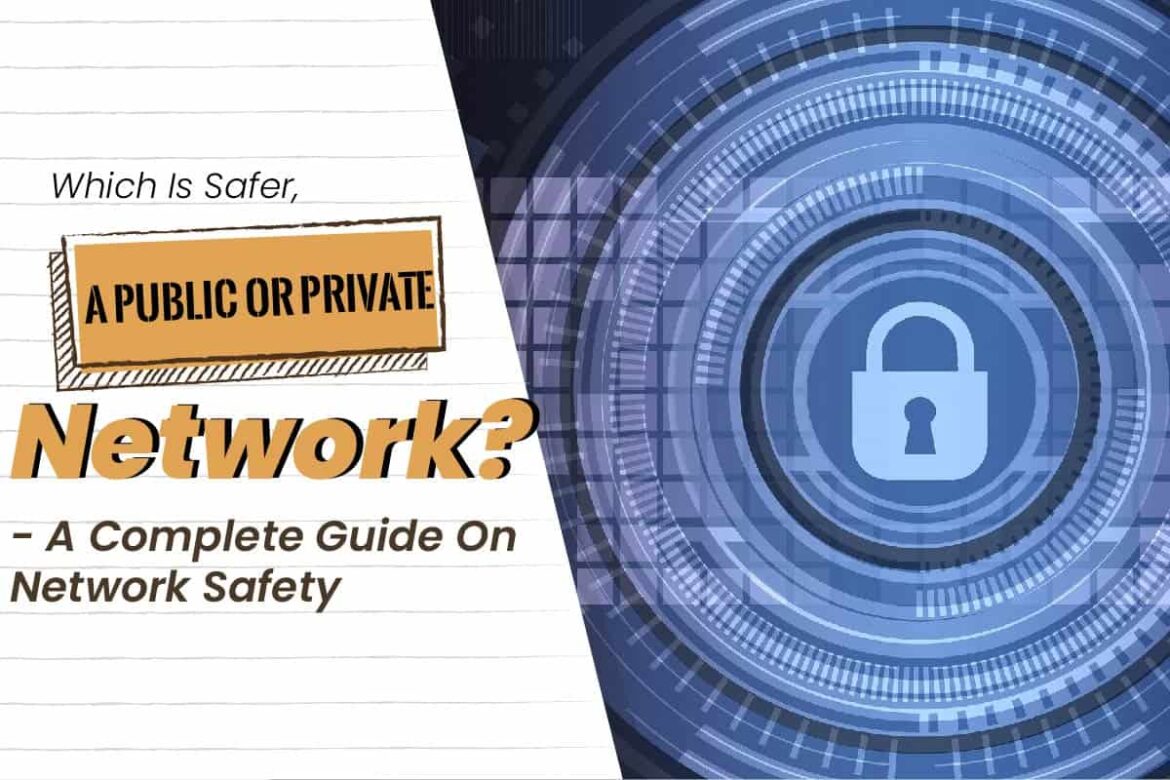 Cyber-security threats have been on the rise over the last couple of decades. Nowadays, it has become a norm to hear about corporations and individuals who have been hacked, with all of these attacks happen in some form of a computer network.

Technological advancements in networking products have brought about solutions to some of the network safety threats. However, a lot of people are still being exploited because they expose themselves to untrusted networks.

So, which is a safer public or private network?

On the other hand, public networks are unrestricted to all devices and cannot be trusted.

What Is A Network?

Before delving into details, let’s take a step back and look at what a network is. A network is basically a group of interconnected devices made up of a networking device and clients.

A simple network setup would involve a networking device like a wireless router and two devices connected through the network.

If the setup has been configured so that a new device has to be authenticated before gaining access to the network, it will pass as a private network.

If other devices can access the setup, it would be regarded as an open or public network.

The internet is the largest public network, and it is made up of billions of devices connected.

Each device on a network is assigned an IP address which is more of an alias name. The IP address allows devices on the same network to communicate with each other and even share files.

One of the great features of setting up a network is that it makes it easy to share files with multiple devices. It also allows employees to access their workstations from remote locations, especially those working from home.

For instance, instead of sending a file via email to each employee’s device one at a time, one can upload the file to a shared folder on the network. Each employee with permission to access the network will be able to access it on their device.

Even though file sharing on a network is convenient, it comes with many risks when done on public networks. This is because data sent through a public network can easily be captured or sniffed by an attacker.

There have been many incidents where employees handling sensitive company materials have had their devices tapped on public networks and stolen company data from their devices.

Upon capturing your data, an attacker may use your details to perform identity theft or even steal money from your accounts. This is why you should never share files on a public network.

To protect their users, some operating systems, including Windows 10 and IOS, have a security feature that does not allow users to share files over untrusted networks.

If you have been using public networks without incident, you probably wonder where all the fuss about public networks being unsafe is coming from. Well, the chances are that you might have gotten lucky, but that won’t always be the case.

Using public networks increases your chances of being hacked as there are so many attacks that can be performed on your device on such networks.

Some of these attacks might be harmless, and you may never notice they ever happened, while others are so serious that they may lead to loss of sensitive data or even wreck your device.

So what are some of the most common attacks performed on public networks?

Man In The Middle Attacks

These are attacks performed on your device when an attacker positions themselves between your device and the router in a network setup. It is the most common attack on public networks as it has a high success rate.

When an attacker joins a public network, they disable the genuine network, clone it, and then display the cloned version to you to connect. This kind of attack can be performed on any network.

When a user connects to the cloned network, all their requests to the internet will first flow through the attacker’s computer before reaching the internet. This gives the attacker the ability to sniff and capture any data they want on your device.

They can also alter the DNS table of the access point and insert links to malicious websites to perform phishing attacks.

So when you log in to your bank portal, you will be redirected to a fake version of the same page. Any information you enter on the phishing page will then be captured and used to steal money from your account.

They may also steal your browser cookies and use them to gain access to websites whose passwords are saved on your browser.

Malware distribution is another common security threat associated with public networks. Malware refers to malicious programs that perform tasks specified by an attacker when installed on your program.

The most common types of malware are Trojans, viruses and worms. Viruses are programs that bind themselves to executable files and, when they are run, can damage files.

On the other hand, Worms do not need executable files as they crawl in a system, causing destruction. Both worms and viruses can be transferred from one device to another.

A Trojan is a type of malware that allows an attacker access to your device. When installed on a device, it opens a backdoor on the target device through which the attacker can download files from your device and upload additional malware.

Some attackers use Trojans to create botnets, a network of infected devices. They then use these botnets to deny service attacks on websites and other infrastructures on the internet.

There have been incidents where innocent people have found themselves in trouble with authorities because an attacker hacked into their device and then use the exploited device to perform hacks on government infrastructure!

How To Safely Use Public Networks

Although it is not advisable to connect to public networks, there are instances where one might not have a choice but to do so. There are tricks that you can use to increase your safety on public networks significantly.

Make sure you disable file sharing and discovery on your device. Turning off file sharing would make it difficult for an attacker to access files on your computer. Disabling discovery allows you to access the network with a hidden identity.

Most devices running Windows and IOS operating systems come with a system firewall. It would be best if you made it a habit to update your system to get the latest security updates regularly.

Set up a virtual private network on your device. A VPN gives you anonymity by assigning your device a new IP address, therefore, masking its identity.

It also adds a layer of encryption to data packets sent over the internet. This makes it difficult for an attacker to intercept your data, and if they do, it may take them a lifetime to decrypt it.

One downside of using a VPN is that it might slow your browsing speed, especially if you are using a free product.

You should also make sure that you have an antivirus installed on your device. Antivirus offers device protection from malicious programs and files by blocking them. Regularly updating your antivirus software will greatly boost its performance.

Most standard antiviruses will scan files for malware before allowing you to open them on your device. Some like Kaspersky also scan websites for malicious links, therefore protecting you from phishing attacks.

Lastly, when using public networks, only browse secure HTTPS websites. This is because these websites follow an authentication protocol that attackers cannot easily spoof.

Traffic sent to such websites is encrypted and cannot be intercepted by attackers.

Safety and privacy should be your number one concern whenever you are connecting to a network. This is why you should always choose private over public networks.

Setting up your own private network might seem like a lot of trouble than using a free and readily available public network.

However, the truth is that public networks are unsafe, and you should avoid using them as doing so only increases your chances of your device being exploited by attackers.

Can You Watch Streaming Apps Without A...

How To Get Minecraft For Free On...

How Do Magicians Eat Glass Without Being...