Do Muslims Have A Winter Holiday? A Must-Read 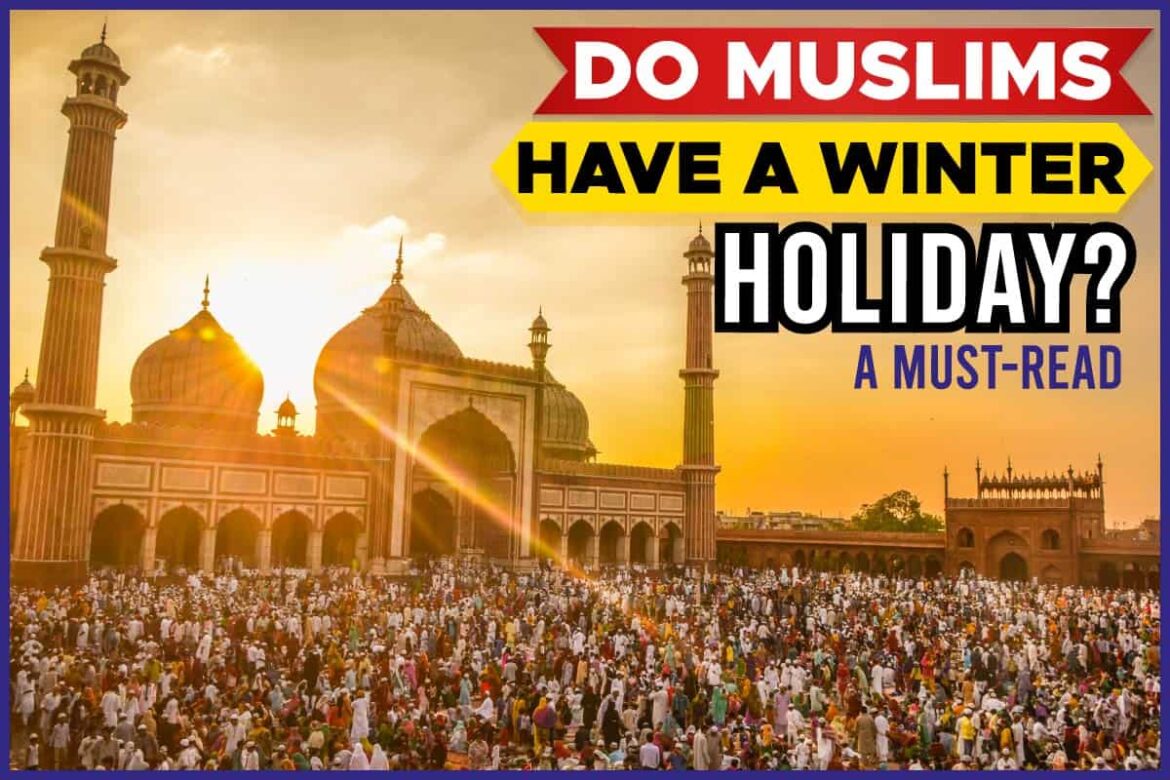 At the onset of winter, the thought about holidays takes over our hearts. But one’s religion sometimes determines how you spend your winter holidays. It’s so true for Muslims.

Muslims practice Islamic religion considered the second-largest religion in the world. They believe in Allah (maker) and Muhammad (Prophet of Allah).

However, Muslims have few holidays compared to other religions. Most of their holidays are special days founded by the Prophet Muhammad. They signify events in his life. And these holidays are usually from the Qur’an.

Now, let’s go back to the question.

Do Muslims have a winter holiday?

No, Muslims don’t have winter holidays. However, they have two major holidays each year called Eid. The holidays don’t have a fixed date but come at different times of the year. The dates are from a lunar calendar.

So, what are the various Muslim holidays? How are Muslim holidays determined? We will address all these and more in this article. Please continue reading!

What Are The Various Muslim Holidays?

Muslim holidays consist of two major festivals and other holidays.

This is one of the major Muslim holidays. It means “festival of breaking of the fast” in Arabic. The festival signifies the end of the Muslim fasting month (Ramadan). Ramadan is the ninth month of the Islamic calendar. It is also a month of fasting at daylight hours. It is such that during Ramadan, Muslims abstain from eating and drinking from dawn till sunset.

The festival begins at the beginning of the month of Shawwal after the new moon is sighted. Prayers on the morning of 1 Shawwal start the celebration. It also has a greeting, Eid Mubarak or Blessed Eid. Both means “have a blessed holiday.”

After the Eid prayer in the morning, Muslims greet each other. Visiting friends and relatives, special meals, food, and parties are part of the festival celebration. Children get cash gifts (Eidi) from their relatives and elders. They also get new clothes and shoes as gifts.

The festival is seen as a time of forgiveness and thanks to Allah for helping Muslims complete their fasting. Most Muslims show their thanks by acts of charity. They also show this by giving food to those less fortunate than them.

This is also a major Muslim holiday. It means “festival of sacrifice.” The festival signifies the day the Prophet Ibrahim was willing to sacrifice his son in obedience to Allah. According to the Qur’an, Allah replaced Ibrahim’s son with a ram, right before he sacrificed his son. So, his life got spared.

The tenth day of Dhu al-Hijjah is the beginning of the festival. Dhu al-Hijjah the Islamic calendar’s last month. That is when the Hajj pilgrimage (pilgrimage to Mecca) takes place.

The festival occurs during the close of the Hajj pilgrimage. It lasts between two to four days, depending on the country. Muslims celebrate the festival by sacrificing a lamb.

This sacrifice is carried out in the morning after the Eid prayer. Part of the lamb is given to the poor; another part to nearby relatives or friends, while the family gets the last part.

Other animals like goats, sheep, or camels can be used. The sacrifice signifies obedience to Allah. Sharing of the sacrifice is an expression of generosity. But the day is usually spent with family and friends. It also includes wearing one’s best clothes and giving out gifts.

This means “the birth of the prophet.” It is the celebration of the birthday of Prophet Muhammad. It takes place in the third month of the Islamic calendar called Rabi’ al-awwal.

The celebration takes many forms in various Muslim communities around the world. Some Muslims read about the life of the Prophet or listen to teachings in the mosque. Others sing and celebrate with joy.

The holiday is a focus on the life and character of the Prophet. It also focuses on his wisdom, teachings, leadership, sufferings, and how he forgave his enemies.

Now, this is the Islamic New Year. Muslims celebrate it on the first day of Muharram. It marks the beginning of a new Hijri year (the Islamic lunar calendar). It also marks the migration of the Prophet Muhammad and his followers from Mecca to Medina.

Unlike New Year’s celebrations of other calendars, the Islamic New Year celebration is usually quiet. Most Muslims regard it as a time of reflection on the year to come. In recent times, some Muslims exchange cards to celebrate the holiday.

This is celebrated on the 10th day of Muharram. It is the remembrance of Moses’ deliverance of Israelites from Egypt, in the hands of Pharaoh. Some Muslims mark the day for remembrance of Husayn ibn Ali, the grandson of Prophet Muhammad. He was martyred during the time of the Battle of Karbala. It is a period of fasting and inner thoughts.

This is celebrated on the 27th day of Rajab (the seventh month). It signifies Prophet Muhammad’s journey from Mecca to Jerusalem, followed by his ascent to heaven and return to Mecca. Muhammad got instructions to start the five daily Muslim prayers while in heaven. Muslims celebrate this holiday by offering prayers.

Muslims believe that Prophet Muhammad ascended into heaven from a rock. The rock is now the Dome of the Rock (a sacred building in Jerusalem).

Observances Before The Major Muslim Holidays

This happens to be the ninth month of the Islamic lunar year. Muslims all over the world fast during the period. They abstain from food, drink, and sexual intercourse from dawn until sunset for a period of twenty-nine or thirty days. Individuals that are ill or in any condition that makes fasting a health risk are excluded. But they compensate by preparing the meal for fast-breaking for others or the needy. Children often participate for some period during the day. But they are not required to fast until puberty.

This is a period where Muslims practice self-sacrifice, purify their lives, and focus completely on Allah.

Muslims believe Ramadan is full of blessings. It’s customary to wish others well at the start of the month. Greetings are; “Ramadan Mubarak (Blessed Ramadan),” “Ramadan Kareem (Noble or generous Ramadan),” or “Kul ‘am wa enta bi-Khair, which means (May every year find you in good health).

Iftar: Iftar This festival involves the breaking of the fast. Throughout the Ramadan period, Muslims usually start each day with a pre-dawn meal (Suhur) before the day fast. The fast ends at sunset with iftar. This meal takes place at the prayer called Maghrib (early evening prayer).

Iftar is usually eaten in groups. But Muslims often break their fast by consuming three dates, as prophet Muhammad did.

Iftar is often eaten in the community. Believers break their fast by consuming three dates, as Prophet Muhammad did during his time on earth. Most Muslims also believe that sharing Iftar with someone in need is a charity that the Prophet also practiced.

Muslims embark on this pilgrimage every year. They go to Mecca, Saudi Arabia, the birthplace of the Prophet Muhammad and Islam.

Hajj begins from the 8th to the 12th day of Dhu al-Hijjah, the last month.

Every year, Muslims embark on the Hajj (pilgrimage) to Mecca, Saudi Arabia, the Prophet Muhammad’s birthplace, and the Islamic faith. The journey is considered compulsory for all Muslims (adults) at least once in their lifetime.

How Are Muslim Holidays Determined?

Muslim holidays are based on the Muslim lunar calendar. The calendar was established when Prophet Muhammad and his followers migrated from Mecca to Medina. It also brought about the celebration of the Hijra.

Muslim holidays begin with the sighting of the moon. So, the calendar can be predicted in advance. However, a sighting of the new moon’s first crescent is confirmed before the start of each month is known. So, other dates within that month can then be determined. Festival dates are declared by a committee of Muslim leaders in a country. It’s the practice in many Muslim countries.

All holidays begin at sunset on the evening before the date given. The Eid al-Fitr and Eid Al-Adna are usually 70 days apart.

In 2001, for the first time in American history, the U.S. Postal Service issued a U.S. postage stamp celebrating both holidays. Since then, there have been several issues of Eid stamps.

Similarities Of The Major Muslim Holidays

Some of the five pillars of Islam are observed during the festivals. These five pillars are; the profession of faith (shahada), prayer (salat), alms (zakat), fasting (sawm), and pilgrimage (hajj).

At both Eid holidays, people greet each other by saying, “Eid Mubarak or Blessed Eid.” It’s usually done after performing the Eid prayer.

Both holidays days are celebrated by the will of Allah to seek pleasure in Allah.

Muslims thank Allah for making it possible for them to complete their fast in Ramadan on Eid al-Fitr and accepting an animal as a sacrifice instead of a son – on Eid al-Adna.

Muslims don’t have a winter holiday. Their holidays have no specific date, but you can determine their date through the Islamic calendar and moon sighting. However, Muslim holidays and celebrations are usually very colorful. But it’s a period for Muslims to celebrate and give to others in need.

We hope you now understand Muslim celebrations and their meaning. Thank you for reading to the end.

Tips On How To Check If Someone Is In The Hospital

How Much Are Fishing Licenses At Walmart: Read The Best Answer

What Can You Find Between The Knees Pillow

The Main Reasons Why It’s Never Too Late...

Do You Wear Socks With Crocs? How To...

6 Innovative Products That Can Help You Get...

Pearls Of Wisdom On How To Send Flowers...

What Are Some Cool Hacks For School...

How Much Are Fishing Licenses At Walmart:...