How To Expose A Narcissist In The Workplace: A Must-Read 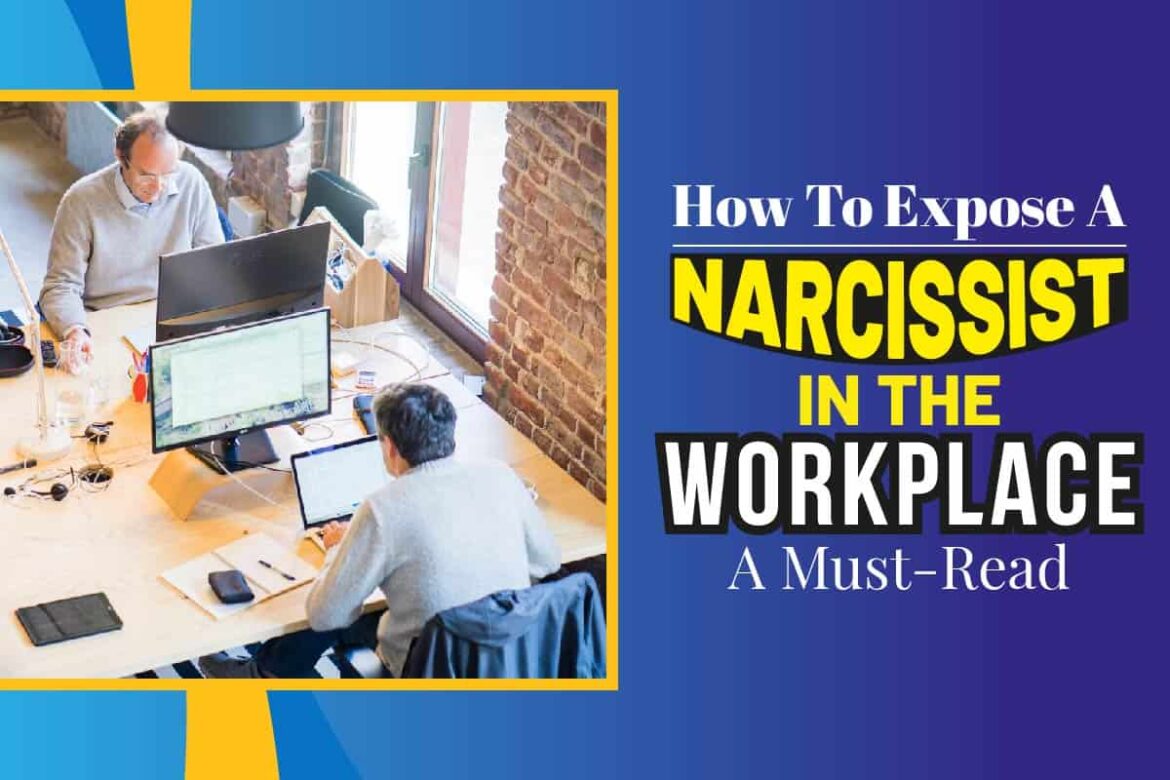 How you treat people around you is how they’ll define you. Your personality determines how you react to situations and people.

Narcissists are one of such people whose personalities are questionable. They’re not considered rational or decent. So their personality disorder can be a negative impact on their relationships. These include family, work, and social relationships.

But here’s one crucial question we can’t just ignore.

How can you expose a narcissist in the workplace?

Narcissists not only enjoy bullying people. They may even take the credit for jobs done by others. Exposing a narcissist isn’t going to be an easy task. Remember that narcissists are never wrong. They don’t care about others and feel no remorse.

So, if you’re serious about exposing a narcissist, you have to have courage. Say the truth and without compromise. Narcissists enjoy being domineering. So, you must be ready to defend yourself and show them that you’re not afraid of anything.

Keep reading to get more ideas on this.

Who Is A Narcissist?

A narcissist is an excessively self-absorbed person who does not care about anyone but craves attention. Narcissists only have interest and admiration for themselves. So, they’re in love with their inflated self-image that allows them to avoid feelings of insecurity.

Narcissists are self-centered, arrogant, and lack empathy. So, they don’t consider other people but have an excessive need for admiration.

Why Does A Person Become A Narcissist?

People can become narcissists due to their childhood experiences. Abuse, neglect, or excessive criticism during childhood can traumatize a child to look for ways to cope.

On the other hand, excessively pampering a child can cause this. When you allow most children to have their way always, you could be creating a narcissist.

Sometimes, it is usually caused by genetic factors. In this case, a sibling may develop the disorder while another who grew up in the same household won’t. Such genetic factor includes the temperament of the child.

As children develop, they tend to have a combined view itself. These include the ability to feel he or she is both right and wrong. He can see himself realistically. Narcissists don’t develop this ability. So, they have a broken view of themselves. All that matters is that they get all they want.

They can’t see others as individuals with feelings, desires, and needs of their own. Instead, they see others as objects that exist to meet their perceived needs.

How To Expose A Narcissist In The Workplace

Before you expose a narcissist in your workplace, bear in mind that you’re not dealing with a decent or rational person. So, it takes some courage to expose them.

The best way to expose a narcissist is to bring the toxic behaviors into the light. Narcissists get people to take their side against someone that they perceive is against them. So, you need to help these people see them for who they are.

Have facts of conversations or encounters you know. Then bring it up clearly and calmly in group meetings that consist of many people. This will enable people to see the truth. It can trigger the narcissist to show their true colors in public.

However, you have to prepare yourself because narcissists can tell numerous lies to cover up themselves. But your facts will counter the lies. Also, you can decide to remain silent during his nasty retaliation. He will expose himself in public.

However, exposing them in public can make them leave the workplace. That’s because they have a sense of high status.

So, you can also choose to coexist with them without being affected. You can do this through:

Although there are different types of narcissists, the popular ones include:

They are also called overt or extraverted narcissists. They are boastful attention-seekers who always want to be in the limelight. They care only about themselves, are aggressive and authoritarian. Despite the pain that they cause others, they feel high self-esteem and are pleased with their lives. They are full of themselves.

Because of their nature as extroverts, they seem to be full of confidence. However, they seek attention and dominance over other people. Sometimes, they can be abusive, manipulating others.

Generally, grandiose narcissists express themselves through exploitation, intense envy, lack of compassion, aggression, and show-off behaviors. However, this behavior can result from being treated as better than or above others as a child.

Rather than being confident and self-satisfied like grandiose narcissists, they are insecure and are not content with their lives. They go through more anxiety, depression, shame, guilt, and hypersensitivity. Also, they see themselves in both puffed-up and negative ways. Their negative emotions can limit their personal growth. They don’t boldly dominate people but use threats and are distrustful. Also, they push blame on others and are resentful.

However, the behavior of vulnerable narcissists is usually due to neglect or abuse as a child. So, their narcissistic behaviors serve as a protection from feeling inadequate. They shift between superior and inferior feelings. And feel offended when people don’t treat them as though they’re special.

The selflessness that people show is vain. They’re just as selfish as grandiose narcissists. Although their motives are similar, they show different behavior to get them. Such motives are entitlement, dominance, and attention.

They exhibit extreme narcissistic behaviors. They’re also cruel and aggressive. Also, their behaviors are paranoid, immoral, and sadistic. They feel pleasure when they cause chaos and take people down. These narcissists aren’t necessarily grandiose, extroverted, or unstable but are closer to psychopathy, the dark personality, and anti-social personality disorder.

Narcissists show a foolish sense of being superior. So, they believe they’re special and better than others. They tend to have a sense of being too good for anything ordinary or average. Also, they only associate with people of high status or places and things that show high status.

Narcissists expect to be recognized, even when they’ve not earned it. They usually exaggerate or lie about their talents, status, or achievements. Also, they prefer to talk only about themselves and feel people should be lucky to know them.

The continuous fantasy of never-ending success and power

Narcissists tend to live in a continuous fantasy that doesn’t match their reality. It is in the form of distortions and self-deceptions of eternal success, attractiveness, and power.

However, the fantasies shield them from feeling shame and inner emptiness. They put up a defense against anything that threatens their fantasy or even responds with rage. So, people around them need to be careful.

A constant need for praise and attention

The sense of superiority of narcissists depends on a steady flow of praise and recognition. The constant flow of compliments fuels their ego. So, they stay around people who are always ready to satisfy their need for affirmation.

Narcissists expect special treatment as their entitlement. So, they expect to get whatever they want. So they expect people around them to comply with what they want. You become useless when you don’t meet their need. And if you don’t agree with them, they treat you aggressively or with rage.

Takes advantage of others without guilt

Narcissists don’t care about the feelings of others. So, they see the people around them as objects to serve their purpose.

Narcissists don’t think of how their behavior will make others feel. And they’re not mindful of it, even when you point it out. They only understand their needs.

Perceived sense of threat when others seem more talented

Narcissists feel people envy them but envy people who seem more talented. They feel threatened when people challenge them or have what they lack. So, they’ll do all they can to put such people down.

You may have an edge if you know how to coexist with narcissists at the workplace. So that, even though you’re unable to expose them, you can build boundaries to protect yourself.

Is Robinhood Safe Social Security? Everything You Need To Know

Are Bears Related To Dogs? Here Is What You Need To Know

5 New and Interesting Ways to Advertise Your...

Is It Bad To Sleep With Led...

How To Make Your Snapchat Dark Mode...