Can You Be A Lawyer With A Criminal Record? The Ultimate Career Guide 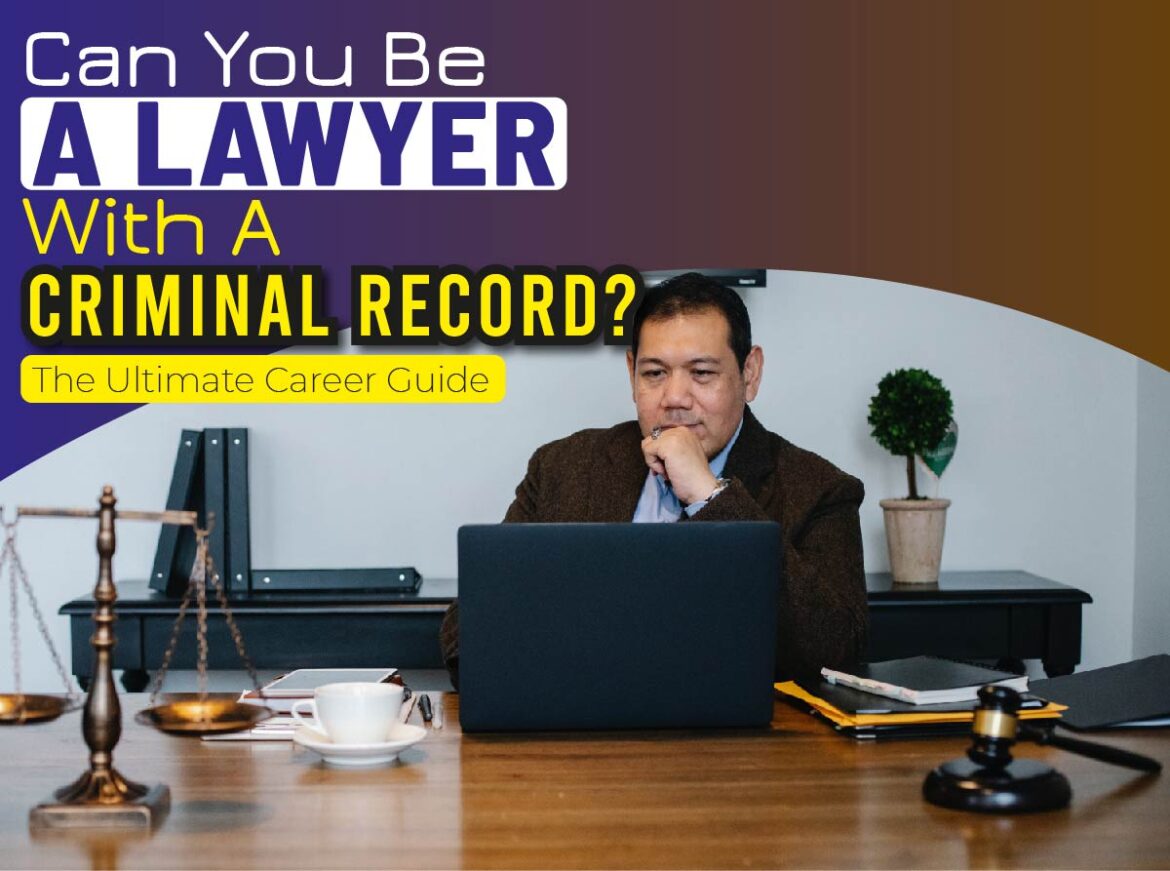 A career as a lawyer is so rewarding both socially and financially. Many consider it to be a noble career choice. This is because lawyering involves helping other people to resolve their legal issues.

Due to the unique roles that lawyers play in society, many people expect lawyers to have outstanding morals and not be a part of criminal activities. They forget that lawyers are humans. Like everybody else, lawyers can also make mistakes.

However, several state agencies have been formed to check and regulate practicing lawyers and those studying law. These agencies are always so strict. Their strictness has made those who wish to study law ask.

Can you become a lawyer with a criminal record?

Yes, however, you need to be candid about your past mistakes. Explain everything to the bar and prove that you have since transformed into a better citizen. Those who are trying to transition from prison to a lawyer will face a lot of scrutinies.

They might be subjected to a thorough character and fitness evaluation that is more vigorous than other applicants. The comprehensive background check might involve a trial-like hearing. The trial intends to find more information on the applicant’s moral character.

Most believe that the bar exams are the highest single obstacle on the way to a law career. The three-day test is so hard.

However, there is another big challenge, the States Bar’s assessment of their moral character. To some, this is harder than the bar exams.

The hearing process takes around six months. It stretches even longer depending on the case. Clients with criminal records should be ready for an emotional ride.

They should prepare to show the changes they have made since making the poor decisions in the past.

The states have varying rules deciding if a person with a criminal record can become a lawyer or an attorneys.

In Mississippi, nearly all applicants with felony convictions are rendered ineligible. While in Texas, Kansas, and Missouri, people have to wait five years after their probation and prison terms to apply for admission to the bar.

In Michigan, anyone applying for the state bar is required to file an affidavit. The information they give includes their personal history, among other things.

It also asks about past convictions, pending charges, and expunged offenses. Other conducts such as unresolved debts and cheating on a law school exam might be hurdles.

Rejected applications are forwarded to a panel of volunteer lawyers for an in-person interview. Recommendations from the board are sent to the second committee.

The second committee might choose to hold a formal hearing that operates as a trial. Substantial evidence and sworn witness testimonies are required. The applicants are to prove that they are transitioned to a good moral character.

The board makes the final decision of law examiners; its members are nominated by the Supreme Court and appointed by the governor. They check the applicant’s past criminal conviction, nature of the offense, time of the crime, and rehabilitation.

It is the largest professional association. To be a member of ABA, a lawyer does not need any special requirements to practice law.

The ABA performs several functions such as accrediting law schools, provides information about the law, continuing legal education, and creating training programs for lawyers and judges. It also betters the legal systems for the larger public.

The ABA has been in the frontline in giving guidance on matters concerning leadership in professional responsibility and legal ethics. It has created a set of professional standards that regulate the legal professions.

The ABA is not a lawyer’s disciplinary committee/agency. It does not discipline lawyers. It has no power to investigate and act upon any complaints brought against lawyers.

The ABA has set some model ethic standards that highlight how lawyers should conduct their selves. These model rules were adopted on August 2, 1983, by the ABA House of Delegates. These rules have undergone several amendments since.

This association is state-based and represents the attorneys practicing law at the state level. Their functions do vary according to state.

The associations’ general operations are: administration of the state bar examination, regulates continuing law education, monitors the attorney’s clients’ accounts, and disciplines any attorney who violates the set standards.

Certain states require their lawyers to study from specific institutions. After successful completion of their studies from the law school, they are directly licensed. The graduates are not subjected to the state bar examination.

To be eligible for the state bar examination, one must have graduated with a Juris Doctor degree. It should be from a certified law school in the United States. Or have an equivalent degree from foreign universities.

Graduates from foreign universities may be required to do additional studies to sit for the bar exams. After successful completion of bar exams, one goes through the character and fitness check.

The in-house lawyer requirements are similar in many states. Many states allow the lawyers licensed in other states to practice in-house. However, the lawyer should be willing to comply with the registration requirement of the state.

Reason To Become A Lawyer

Lawyers are among the best earners in the legal industry. Their average salary is about $120,190. However, the lawyers’ salaries are greatly dependent on their experience level, the firm’s size, and the region.

2. Opportunity to help other

The lawyers are better positioned to help other people, organizations, and groups with their legal problems.

The public interests lawyers ensure the betterment of the public’s interests. They help those who require legal service but lack the finances.

Private practice lawyers provide their services at an affordable cost. They help low-income individuals and unfortunate groups such as the elderly and victims of domestic violence.

To be a lawyer, one has to be intellectually robust. It is crucial to their career success. Lawyers are expected to plan and think through cases. They are even involved in forming multimillion mergers for various companies. In general, they are innovative thinkers and problem solvers.

A lawyer’s profession is honorable and admirable. Lawyers command a lot of respect among their peers in other industries. They enjoy a unique professional status and get praises from the media.

Risks To Your Career As A Lawyer

Developing your career as a lawyer is among the most daunting professional paths. It comes with a lot of emotional and intellectual challenges, which causes stress along the way.

Practicing law is so isolating. This makes it difficult for one to recognize the problem and seek help to resolve them. Some of the risks lawyer’s faces are:

Addictive behaviors are hard to identify by yourself. They are easily noticed by those close to you, like friends and family. It may include drinking, abusing drugs, gambling, compulsive sex, use of laxatives, etc.

Addiction can affect your career in several ways. It might lead to work errors, neglect of work, mismanagement of clients’ funds, and many other social/health problems.

It’s not only about feeling blue. Depression has several symptoms like loss of interest, motivation, hope, energy, social withdrawal, and concentration and memory problems.

Depression has a significant impact on one’s productivity and behaviors.  It can make you neglect cases and make errors due to low concentration. This leads to disciplinary complaints. Depression is also genetic. However, it’s easily treatable with either counseling or medication.

A career as a lawyer can make you be a workaholic. The most affected are the new lawyers who try hard to their names in the industry. New associates, too, do have pressure for promotions in large firms.

Working extra hard and for extra hours has its effects. You get detached from the real world and neglect your family and personal needs. It may result in a relationship/marital issues and stress-related illnesses.

Many think of attention deficit as a child’s problem. However, it also affects grown-ups. People with ADD tend to be more creative and intuitive.

Although they find it hard to prioritize, organize and concentrate. The result includes incomplete projects and missed deadlines. The neglect of cases by people having ADD is always unintentional.

Avoidance and procrastination can be signs of other serious issues. It might indicate phobic problems and anxiety. It may also be a reflection of hidden fears, such as the fear of failure or success.

Lawyers, like other humans, are imperfect and prone to mistakes. There are different types of lawyers, such as immigration and criminal lawyers.

Although the lawyers have been commissioned to defend and protect our rights, they may occasionally have their criminal records.

The critical steps of becoming a lawyer are passing the bar examination and moral character exams. Having a criminal record might only slow down your licensing.

Having a criminal record does not necessarily mean that it’s impossible to pass the moral character exams. However, the bar committee’s decision on one’s criminal record varies greatly depending on the state.

What Does The Cross Mean On Nutrition Facts? Health Wisdom

Does It Matter Where You Go To Medical School? Here Is What You Need To Know

How To Make Your Hair Go Grey...

Why Do Babies Stare At Me Spiritual...

What Are The Differences Between Job Position...